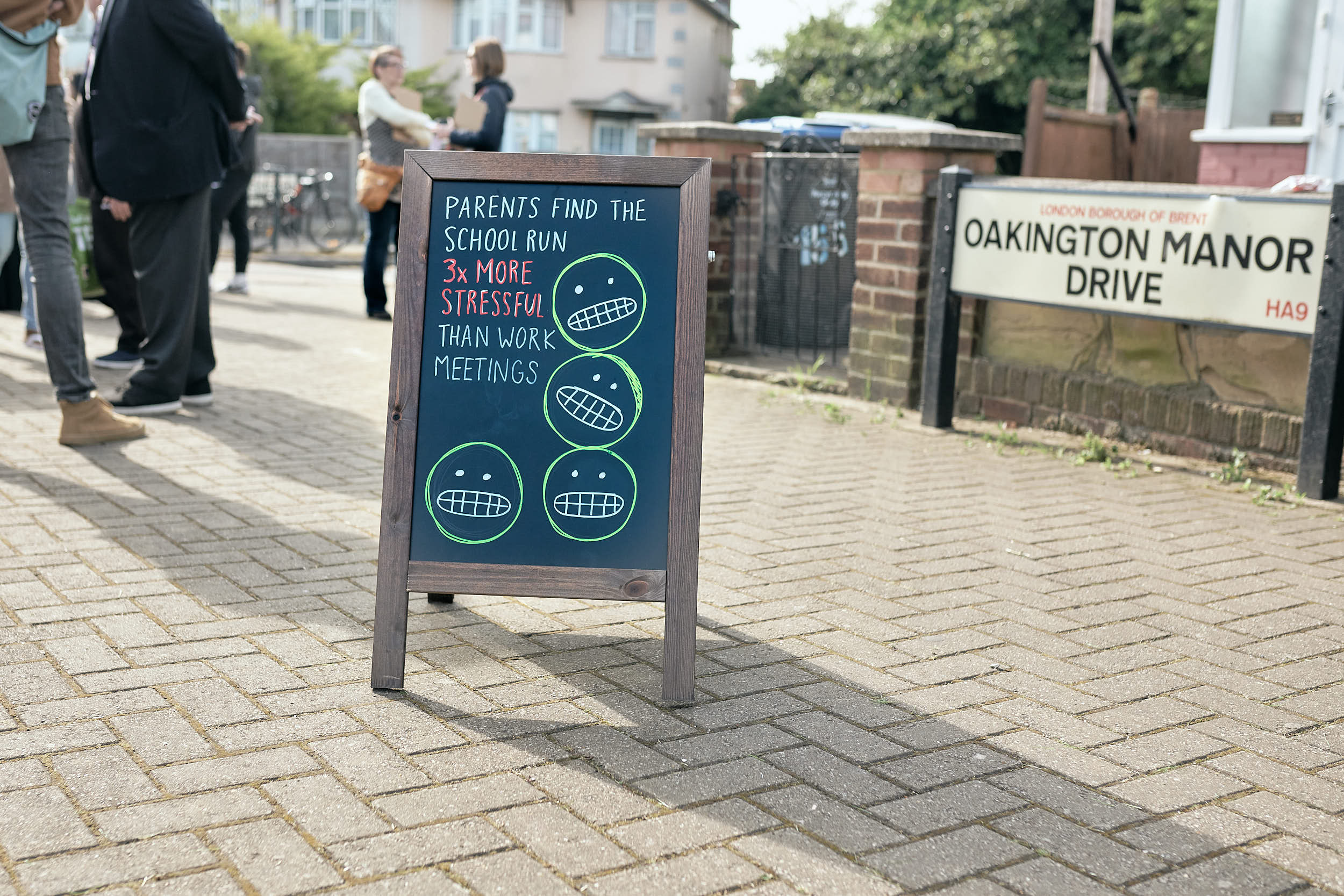 New GB-wide polling data commissioned by the Clean Cities Campaign shows that parents of children aged 18 and under are three times as likely to find the school run stressful as meeting their line manager at work (22% vs 7%) and almost twice as likely as commuting to work (12%)1.

It coincides with the launch in London of a Europe-wide campaign to urge city leaders to create thousands of new ‘school streets’ across the continent, with a focus on newly elected councillors.

Parents would much rather walk or cycle with their children to school, with nearly six in ten (59%) saying that walking or cycling is the best way to spend quality time with their children, while only one in ten (11%) say driving is a way to bond and engage with their children. Increased safety (39%) and cleaner air (10%) are listed as the biggest potential benefits of school streets, according to the polling2.

Despite this, official data shows that up to two-fifths (43%) of rush-hour car trips in some parts of London are linked to school drop-off. Overall across London over a quarter (27%) of peak car driver trips in the morning are for school drop-off. Tower Hamlets has the highest level of any London borough at 43%3, according to official data from Transport for London (see Table 1).

The day after local elections in the UK, grassroots environmental groups across Europe led by the Clean Cities Campaign are urging local government leaders to commit to install ‘school streets’ or similar measures, where the road space outside a school is temporarily closed to traffic across every school.

Will Norman, London’s Walking and Cycling Commissioner said: “Currently the school run accounts for a quarter of morning traffic in London, and this is why School Streets – which encourage walking, cycling and scooting – play such a vital role in driving down congestion, air pollution and road danger.

“In the capital we have seen the massive difference School Streets have made to our communities alongside strong support from Londoners, with more than half of London’s 5-11 year olds now walking to school. Research shows that this reduces nitrogen dioxide by up to 23 per cent during the morning school drop-off. There are now more than 500 School Streets across the capital and we know that children, parents and councils are keen to introduce even more.”

The ‘Streets for Kids’ initiative, has been developed by a coalition of 60 environmental groups across Europe co-ordinated by the Clean Cities Campaign and in collaboration with Kidical Mass. The campaign will host a special launch event on Friday 6th May, the day after UK local elections. It is part of a Europe-wide week of action, which will include events in 40 cities and 10 countries including bike-to-school rides at peak hours.

The UK launch event on 6 May will be attended by Will Norman, the Mayor of London’s first Walking and Cycling Commissioner, and campaign activists, parents and local councillors have all been invited, with engagement from across the political spectrum.

There are around 500 school streets in London4 and a recent study by the Greater London Authority showed how they can reduce nitrogen dioxide (from diesel cars) up to 23%, while substantially reducing traffic throughout the day5.

They are also popular with parents – two thirds (66 per cent) of parents and carers at schools without School Street measures support their implementation, according to research by Transport for London (TfL) while 81 per cent of those surveyed at schools where measures had been implemented believed a School Street is suitable for their school6.

Friday’s launch will also see the unveiling of a ‘School Jam’ pop up cargo bike cafe to highlight and celebrate the restorative power of school streets. Arriving just in time for the school street to kick in, the School Jam bike will provide breakfast options, comfy chairs, relaxing greenery and birdsong. It will go on tour across the capital visiting Southwark, Wandsworth and Brent.

Signage on the bike, as well as chalk boards and deckchairs, will showcase the benefits of school streets allowing stressed out parents to relax from the rigours of the school run and discuss how using active travel (walking, cycling, scooting) can be a less stressful way to get the kids to school and allow a better quality of life and parent-child bonding.

Across Europe, thousands of children are expected to ride their bikes and play on the streets in front of their schools to raise awareness for cleaner air and to reduce dependence on oil.

Children from Slovakia to Spain, Portugal to Poland will take to the streets together with their parents, teachers and environmental groups, to demand their cities close off streets in front of schools to cars. The grassroots campaign, activated throughout Europe including the UK is mindful of the ongoing war in Ukraine and highlights the continent’s struggle to wean itself off its dependence on Russian oil. Over 170 events by local partners and parent groups are expected to mobilise on the launch day.

“School streets” are an important element of zero-emission mobility, providing more space for people and reducing car dependency in cities: there are 500 in London, 170 in Paris, 120 in Barcelona.

“We’re calling on city leaders across Europe to commit to reducing traffic outside schools. Temporary road closures during pick-up and drop-off – known as school streets – are one of the best ways to reduce children’s exposure to air pollution and road danger, as well as helping them walk, scoot and cycle to school. Fewer cars around schools in the morning also means more reliable bus journeys and more space for businesses that need to use the roads.”

Henrietta Rooney, a parent at Bessemer Grange Primary in Southwark, who helped lead a campaign to create a school street, said:

“Before we had a school street outside Bessemer Grange, the road outside was dominated by cars, and parents shouting for their children to watch out, and be careful. It wasn’t unusual to see drivers mounting the pavement to pass each other, or even to park. Since closing the road to through traffic the entire atmosphere has changed. The school run is far safer and more relaxing.  More children are walking, scooting and cycling to school, and the road is now a place for children and parents to meet, walk and chat on their way to school. The whole community benefits from the cleaner air, but the biggest benefit is for the children who can now walk, cycle and scoot to school safely.”

The grassroots group Mums for Lungs, which is part of the coalition, is calling for a School Street at every school by 2025, with an alternative package of support where this is not feasible.7

They are asking councils to ensure all feasible schools (secondaries as well as primaries) can implement the scheme. Alternative options for those schools which cannot have their road closed include green screens to reduce the level of pollution within the school grounds, moving school entrances and playgrounds, and implementing controlled parking zones from 8:30am to 6pm to discourage parents from driving to school, in a radius of about 300m around schools.

Jemima Hartshorn, Founder of Mums for Lungs said: “All the evidence clearly shows that school streets reduce children’s exposure to air pollution and indeed, encourages parents to travel to school without a car. We have been campaigning for them for years and this data further spurs our enthusiasm to do more of that. But we also need to see more action – like green screens and controlled parking to clean up the air at schools where School Streets are unsuitable.”

David Nicholson, a parent at Our Lady of Victories Primary School in Wandsworth, said: “I was able to help set up a school street covering two primary schools in Putney8 and I’m delighted to hear there are now 500 operating across London. It’s really important to remember school streets are not anti-driver, they are just brief closures to through traffic at school drop off and pickup times.”

“Most schools have hundreds of pupils at primary schools with their parents, siblings and even dogs as well, all coming in and out of a school at the same time. A school street simply says if there are hundreds of people on the pavement in a half hour period and say 50 people using the road in cars then let’s temporarily close that road. Just like what happens when everyone leaves a big football match. It’s efficient, safer and nicer for the kids too.”

Amandine Alexandre, Brent clean air campaigner, said:  “School streets need to be properly enforced across Brent to be effective at cutting air pollution and changing parents’ habits. They need to be part of a wider and ambitious plan to clean up the air in and around schools. Children’s health, wellbeing and learning benefit tremendously from cleaner air. We need school communities to fully embrace a clean air ethos with the support of Brent council.”

School streets are not new, but there has been an explosive expansion in response to COVID-19, according to a new study from the FIA Foundation and Child Health Initiative published on 28 April, ‘School streets’ schemes have increased five-fold in less than four years.9

The #StreetsforKids European wide Day of Action is being organised in collaboration with London Kidical Mass, volunteer led friendly bike ride events, highlighting the fact cycling is for everyone, including children of all ages. The next London Kidical Mass is on 15 May going from Monument to Southwark Park. More information: https://twitter.com/KidicalMassLond.

Polling data, graphics and photos: hereJournalists are welcome to re-use content, with attribution to ‘Clean Cities Campaign’ and in accordance with UNICEF’s guidelines for reporting on children.

Polling data from YouGov Plc. Total sample size was 2,006 adults. Fieldwork was undertaken between 28th – 29th April 2022. The survey was carried out online. The figures have been weighted and are representative of all GB adults (aged 18+).

The School Jam materials and items