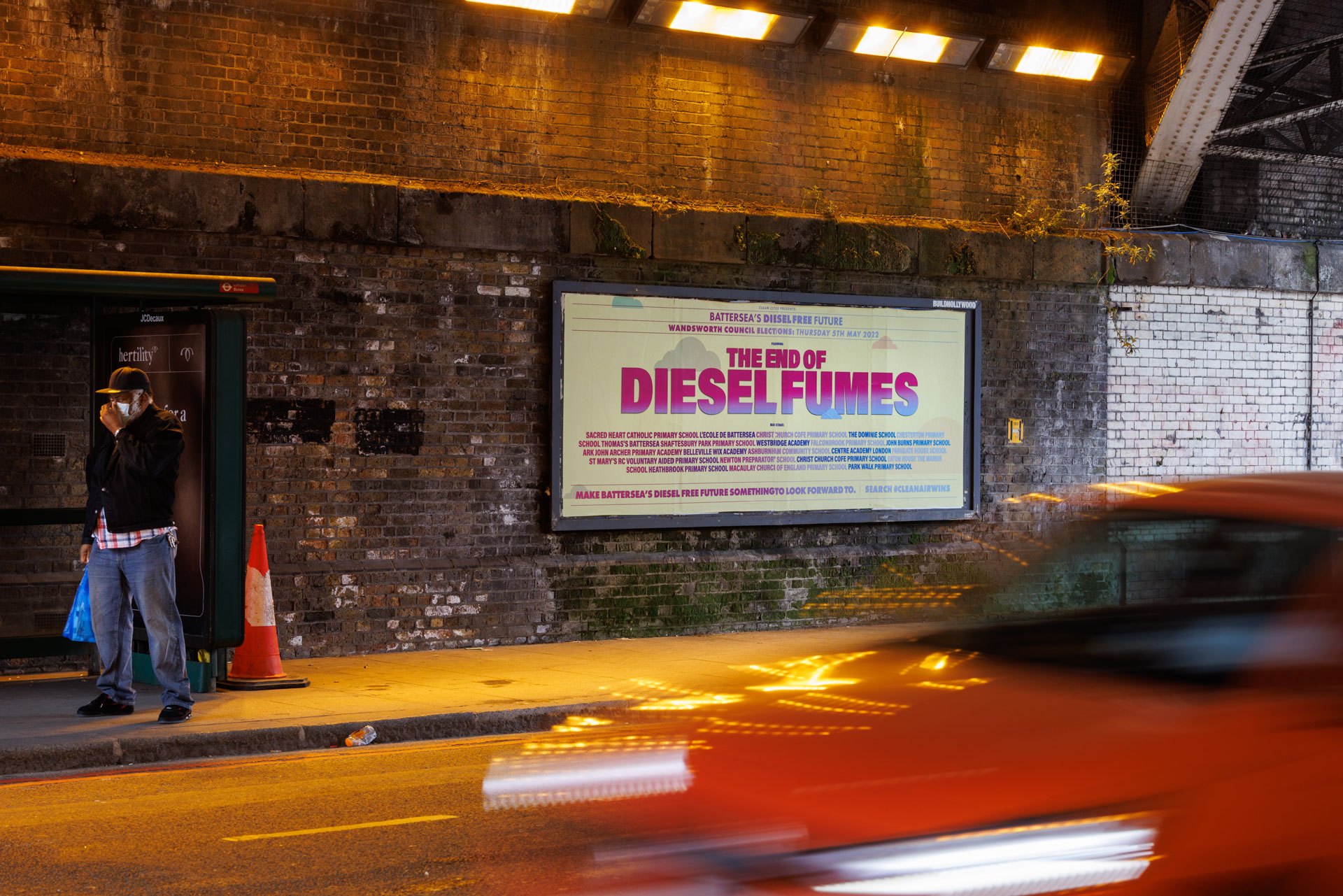 The data reveals Islington could be on track to be the first London borough to go diesel free with a total of 6,818 diesel cars registered – the lowest of any borough – and just 69 new diesel cars estimated to have been purchased in 2021. Islington introduced a diesel surcharge on resident permits in 2015 and other boroughs have adopted similar measures. Islington could potentially be free of new diesel cars by the middle of 2023.

Based on trends from the last five years, campaigners estimate that even the least optimistic scenario, and with the right action from local councillors, there will be no new diesel cars registered in Islington in the next 12 months.

Clean Cities Campaign partner, Mums for Lungs, are urging all boroughs ahead of the local elections to go a step further by providing no new parking permits for diesel cars from 2023 (exempting blue badge holders), where controlled parking zones are applied2.

Boroughs with the fewest diesel cars are mostly in Inner London where registrations are lowest and where the London Mayor’s Ultra Low Emission Zone has been in place since April 20193. However, campaigners feel that some Inner London boroughs could be going further and faster. This includes Wandsworth, which is yet to introduce a diesel surcharge on residents permits.
Diesel accounts for 28% of residents’ cars in Wandsworth – putting it on par with Havering, Hillingdon and Hounslow as one of the areas where residents are more likely to own diesel cars in London (see Table 3) – despite also being in the Ultra Low Emission Zone. New billboards have been launched in Wandsworth in an upbeat theme of a music festival, placing local schools on the ‘main stage’ of ‘The End of Diesel Fumes’ to encourage more action.

In the last five years (Q3 2016 – Q3 2021), across the UK, there has been a fall of nearly 90% (89.4%) in the number of diesel cars purchased in the UK, while there has been a 1,674% increase in the number of battery electric cars purchased, albeit from a low starting point. However, there is still some way to go before campaigners can truly celebrate the end of polluting cars as petrol and diesel sales still oustrip electric car sales by five to 1 (255,000 petrol and diesel cars registered in Q3 2021 versus 51,100 electric cars).5

“After years of campaigning and industry smokescreens, the end is in sight for diesel cars. We’ll go far quicker, and save thousands more lives if we give them a final push into the scrapyard. Local authorities must do everything they can to nudge behaviour, including ending car parking permits for new diesel cars from next year and committing to go diesel free by 2030. This would create an important milestone on the journey to healthy air and tackling the climate crisis.”

Despite the downward trend in some areas, diesel is still a disproportionate contributor to air pollution. Recent research showed that diesel cars in London cause three times as much pollution as trucks and lorries6. Pollution from diesel cars contributes to the early deaths of 4,000 Londoners and leads to debilitating illness at an early age, including stunted lungs and conditions from asthma to heart disease7.

In order to ensure that diesel cars are phased out quickly, campaigners are calling for councils to stop providing permits for new diesel cars from next year (2023) with an exemption for blue badge holders. Existing permits would be honoured.

Mums for Lungs have asked the four main parties in every borough to completely phase out all diesel car parking permits by 2030, and for car parking to take emissions into account by 2023, with controlled parking zones in every part of the capital

“Fifteen years ago we called time on cigarette smoke in pubs. Local councils must now call time on diesel smoke in our communities contaminating the air we breathe. This is especially important to protect children, people with asthma and less well off people who are forced to live next to busy roads.”

A coalition of 28 campaign groups brought together by Mums for Lungs and the Clean Cities Campaign have signed a joint declaration urging council candidates to commit to cleaning up London’s toxic air ahead of elections in May, including phasing out diesel cars. The ‘#CleanAirWins’ campaign will put the positive and upbeat case for action on clean air, demonstrating the popularity of such policies.

The groups, led by the Clean Cities Campaign and Mums for Lungs include Friends of the Earth, Sustrans and Living Streets.

Mums for Lungs – Call for a diesel free borough by 2030

We want to see a commitment to phasing out diesel car ownership across boroughs by 2030. Research by the Environmental Defense Fund (Europe) highlights really clearly that diesel is the single biggest contributor of NOx/NO2 (which is the pollutant that inflames lungs, and is closely linked to childhood asthma and wheezing). Reducing the number of diesel engines in the city would be a bold and effective step towards cleaning up our air.

The Government has promised to phase out the internal combustion engine by 2030, with all cars to be zero (tailpipe) emission by 2035. We need to see councils being bold, and taking strong action to help consign diesel to the past.

Ideas for implementing a diesel phase-out include:

[1]Projected from 2021(Q3) figures, which are the latest available. 2021(Q4) figures expected to be published by DfT in May. [2]Existing permits would remain. [3] NB. Major areas of Inner London were covered by the ULEZ when it was expanded in October 2021 [4]Vehicle Licensing Statistics: July to September 2021 [5] See summary in Table 4 sourced from [VEH0253] [6] Diesel cars in London cause three times as much pollution as trucks and lorries [7] Health burden of air pollution in London [8] Local grassroots group

About Mums for Lungs
We are a grassroots network of people who care about air pollution. Mums for Lungs was established in Brixton, London in 2017, when a number of us were on parental leave together. We became aware of the toxic levels of air pollution on the UK’s streets while walking around with our babies, and decided we wanted to do something about it.