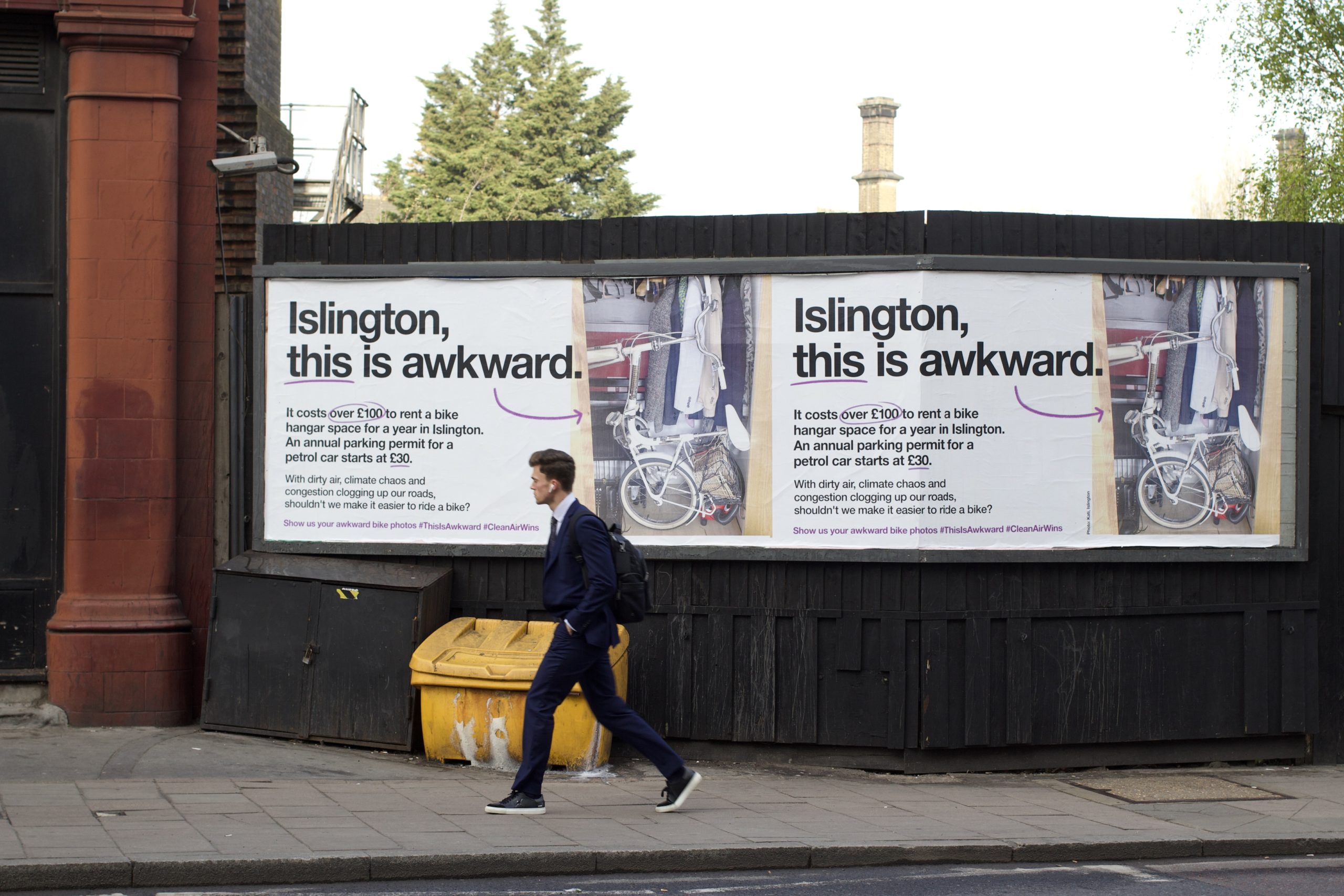 A new report by Fare City, released today, explores the issue of cycle hangars and how Londoners are asked to spend more to park a bicycle in a secure hangar than they are to park polluting cars outside their homes, further embedding car dependency. The average cost of renting a space in a cycle hangar in London is £57.90. This means a family of four would spend on average £231.60 a year parking four cycles, which is nearly five (4.6) times the average cost of parking a petrol car (£50) and seven times an electric car (£29).

Go to the report

The Clean Cities social media and billboard campaign #ThisIsAwkward has been bringing to life the chronic shortage of spaces available for Londoners to park their cycles. New billboards are now running to coincide with the launch of today’s report, focused on the high costs of storage. The first is in Islington, where the cost of a cycle hangar space is an eye watering £107.25 a year – almost twice the London average. This means it would cost a family of 4 trying to securely park their cycles 14 times more (£429) than a resident permit for a small petrol car (£30).

A billboard is also running in Southwark, which has the largest waiting list of any borough with more than 8,500 residents. The billboards showcase the weird and wonderful places people are forced to park their cycles from the bedroom to the kitchen to the toilet, submitted by people on social media. In Southwark it would cost £160 to park four cycles, compared to £32 for a petrol car.

High costs and lack of access to secure storage can be a severe barrier to people cycling, with 400 cycle thefts occurring every week in London, and a 60,000 strong waiting list for a secure cycle hangar space (8,524 waiting in Southwark alone).

Oliver Lord, UK Head of Clean Cities Campaign, said: “This report shows that in some areas the situation is more than awkward, it’s just ridiculous. Cycle parking should never cost more than car parking. We’ve got it the wrong way round. Income from car parking, especially polluting vehicles, should be used to fund affordable and secure cycle parking.

“Who wants to cart their wheels up three flights of stairs or salsa past their wheels when going to the loo? Cycle hangars are a hugely practical way for councils to help people be less dependent on their cars, which is essential to tackling London’s toxic air.”

Charles Critchell, Managing Director of FareCity, said: “As this report makes clear, London boroughs must not only redress the inequity between the cost of parking a cycle versus parking a car but go further and faster to ensure that current demand for cycle hangar spaces is met, and that future demand is nurtured and provided for. If Londoners are to be encouraged – and enabled – to cycle, then secure residential cycle parking is a minimum requirement that boroughs must now prioritise.”

Eilidh Murray, Cycle Islington campaign coordinator, said: “If we’re serious about encouraging people onto cycles then a key enabler is secure cycle storage. It is inexplicable that it’s cheaper to park a car than a cycle in London and especially in areas like Islington where most people live in flats and only 30% of households own a car. Making it more difficult for a family to use bicycles than a car undermines any declaration of a climate emergency.”

Shadia, who lives in Islington, said: “I love cycling in London, but am forced to pay more than 100 pounds a year for a cycle hangar place in Islington – roughly twice that elsewhere in London – because it’s not feasible to carry my cycle up three flights of stairs and put it in a flat that’s too small to house it. It would be cheaper for me to park a car outside my house, where’s the logic in that?”

Susanne, who lives in Islington, said: “It’s not fair if you pay more for a cycle space because you can put six cycles in the same place that a car needs… So a [car] parking space as we all know, is highly subsidised. Just nobody ever talks about that.”

Caroline English, who lives in Barnsbury Park in Islington with her boyfriend, was warned that there were thousands of people ahead of her on a waiting list and ended up waiting six months for a space in a cycle hangar. She was also concerned about the high costs of £214.50 for two annual cycle permits, so is forced to park her cycle in the living room, while her boyfriend parks his next to his home office.

Kati Turkina, who lives in Islington, said: “We get messages constantly on the local messaging group that bikes are stolen. We’ve asked the council for hangars but for now I have to carry my bike up the stairs every day. I’m not the only one either, there’s a huge pile of bikes in the stairwell, which is only getting worse.”

Keri German, a Southwark resident with a cycle hangar space, said: “I think cycling should be at a reduced cost, because not only does it benefit the environment, it’s good for our health. So it’s a win win not only for ourselves but for everyone, the NHS included. There’s a long list of areas that it benefits and I think that it should be encouraged more. Especially with the uptake of cycling over COVID, we need to have the spaces and it needs to be a reasonable cost to all those involved.”

Ryan Bowes, who lives in Southwark, said: “Back in July 2021, my housemate tried to reserve us two local bike hangar spots as we mostly make trips around the city that are short, to work or socialise etc, but not short enough to make on foot. We were told about the high demand for spots and as of today [March ’22] we still haven’t had any news or been able to secure a spot anywhere in the borough. We live in an upstairs flat and our communal corridor isn’t wide enough to fit one bike, let alone two, so unfortunately we’ve had to abandon the idea of getting bikes.”

The Clean Cities Campaign – together with Mums for Lungs, Asthma + Lung UK, the Ella Roberta Family Foundation and many other groups – is calling on councillors and candidates to end cycle hangar waiting lists and install new hangars if elected in May. They are also calling on councils to ensure that it is cheaper to park a cycle on your street than a car.

Residents from across the capital have already been tweeting using #ThisisAwkward with submissions on twitter from cyclists in Islington, Hackney, Hounslow, Lambeth, Lewisham, Tower Hamlets and Greenwich.

Pictures submitted so far include someone who sleeps in a bed next to their cycle; a cycle being stored worryingly close to the oven; a cycle in a wardrobe, a group of cycles being precariously hung over a balcony in a housing estate; and perhaps oddest of all – two kids’ cycles crammed next to a toilet.

Londoners can submit their own images using the hashtag #ThisisAwkward or through this form.

The news comes ahead of an active travel hustings which is being organised in Islington to quiz the main political parties about their active travel priorities for the borough. The online hustings is being jointly organised by Islington Living Streets and Cycle Islington on Monday 25 April 2022 at 6pm.

Notes to the editor:

About Fare City
Fare City is an award-winning London-based think tank and social enterprise. Our mission is to co-create fairer cities through the promotion of more accessible, equitable and sustainable city transport. Our team of built environment professionals uses an evidence-based approach which strives to empower city users to make reasoned mobility choices which are right for them and others. Fare City is a supporting partner of the Clean Cities Campaign.