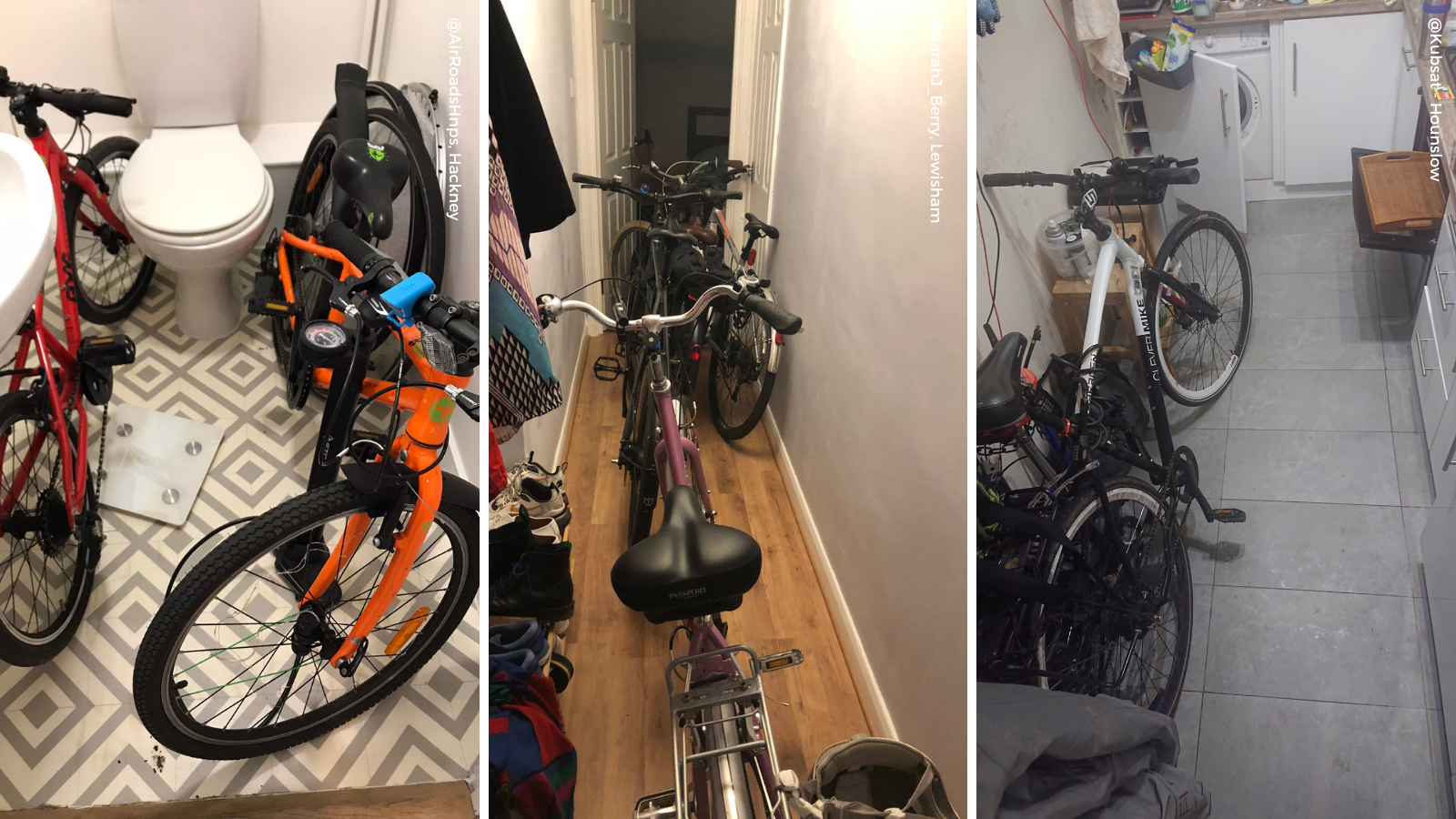 Pictures submitted so far include someone who sleeps in a bed next to their bike; a bike being stored worryingly close to the oven; a group of bikes being precariously hung over a balcony in a housing estate; and perhaps oddest of all – two kids’ bikes crammed next to a toilet.

Residents from across the capital have already been tweeting using #ThisisAwkward with submissions on twitter from cyclists in Islington, Hackney, Hounslow, Lambeth, Lewisham, Tower Hamlets and Greenwich. A selection of pictures (with media permissions) can be downloaded here.

Freedom of Information requests from the Clean Air Wins coalition show that there is a waiting list of 60,715 people wanting to hire a bike hangar across London’s 32 boroughs. That is nearly three times as many people waiting for a space as there are places to hire in bike hangars – with only 22,592 spaces available [1]. If the figures were replicated across other urban areas in the UK it would mean 375,000 people were waiting for a bike space [2].

Based on a similar exercise conducted six months ago, the numbers on the waiting list in London has risen 28%, up from 47,578 [3]. The Clean Air Wins campaign is calling on councillor candidates to commit to providing a cheap, convenient and secure bike hangar space for all residents that need one ahead of local elections being held in May.

The actual waiting figures may be an underestimation of the demand for bike hangars. According to Transport for London’s own analysis, more than half of Londoners see a lack of cycle parking as a key deterrent to cycling [4].

As well as sharing on social media, the best pictures will make it onto billboards around Islington and Southwark, for a two week poster campaign starting on 28 March.

The boroughs with the highest waiting lists are perhaps unsurprisingly in inner London, where space can be at a premium and more people live in flats.

Southwark is the highest in the capital, with 8,524 people registered as waiting to hire bike storage. In North London, Camden has a waiting list of 7,307 while Islington has 6,963 cyclists waiting for a space. South of the river, Lewisham has 5,444 people waiting while Lambeth has 5,169 [5].

Oliver Lord, UK Head of Clean Cities Campaign, said: “More than 60,000 Londoners are waiting for a bike hangar space – and that is just the people lucky to have the time and energy to put their name forward. If councillors want to help Londoners jump on a bike and use their car less then they have to make it as easy as possible. Forcing people to do the ‘cycle salsa’ at home isn’t just an inconvenience, it’s utterly unfair given the abundance of space set aside for cars on our streets.

By not delivering the secure bike parking we need, London’s councillors are failing residents who want to do the right thing and neglecting their duties to reduce air pollution, tackle the climate crisis and help prevent the 400 bike thefts that occur every week [6].

Eilidh Murray, Cycle Islington campaign coordinator, said: “Safer, quieter streets and decent cycle routes are being rolled out in Islington but we need to enable people to use them easily. Who wants to heave a bike up flights of stairs ? The feeling of having locked up a bike to a lamppost overnight and wondering if it will still be there in the morning is one many of us will recognise and dread. There are nearly 7,000 people in Islington waiting for a space in a secure bike hangar – let’s just crack on and get this fixed.”

Caroline English, who lives in Barnsbury Park in Islington, was warned that there were thousands of people ahead of her on a waiting list and ended up waiting six months for a space in a bike hangar. In the end, she had to turn down the offer of the space, as her lease was due to expire, but Islington Council needed her to commit to a space for a whole year.

“I store my bike in the living room and my boyfriend works next to his in the home office – it’s pretty cramped and definitely awkward. Clearly, they need to build many more bike hangars. But you also need to create more flexibility into the schemes – this is London, people don’t necessarily stay in the same place for years. If there was an online system where you could hire on a monthly basis that would help and give some flexibility if people say prefer cycling in the summer months. Giving people another large annual commitment isn’t really realistic.”

Lucy Facer, a parent living in Islington, who runs the ‘Liverpool Road Clean Air’ shared a picture of the awkward cramped conditions in her home office, with a bike right behind her office chair.

Sarah Berry, an active travel campaigner who lives in Lambeth posted a picture of her partner’s new bike next to her bed, saying the only place it felt safe to store it was there after her bike was stolen.

Frances Cherry, a parent at Hackney New Primary School who is a member of the Parent’s Air Quality and Road Safety Group shared a remarkable picture of the family toilet which is cramped with not one, but two bikes in it, making attending to a call of nature incredibly awkward.

Lindsay, from Hounslow shared a picture of her bike precariously positioned near her oven in the kitchen, saying that “no racks or storage available as [we] need all tenants to agree with the purchase”.

A coalition of 28 campaign groups brought together by the Clean Cities Campaign have signed a joint declaration urging council candidates to commit to cleaning up London’s toxic air ahead of elections in May, including phasing out polluting cars. The ‘#CleanAirWins’ campaign will put the positive and upbeat case for action on clean air, demonstrating the popularity of such policies.

The groups, led by the Clean Cities Campaign include Friends of the Earth, Mums for Lungs, Sustrans and Cycle Sisters. Many cycling groups across the capital have also joined the coalition including Brent Cycling Campaign, Cycling Instructors Union, Hackney Cycling Campaign, Joy Riders and Tower Hamlets Wheelers.

Londoners who want to submit their own images can tweet @Cities_Clean using the hashtag #ThisisAwkward or by using this form.

A residential bike hangar is a secure bike storage unit you can use if you can’t store your bike in your home. It normally provides space for six bikes and can be installed on the street or in an estate. Hangars are accessed using a key, and renters share the space with five other people. Most spaces are rented through local councils.