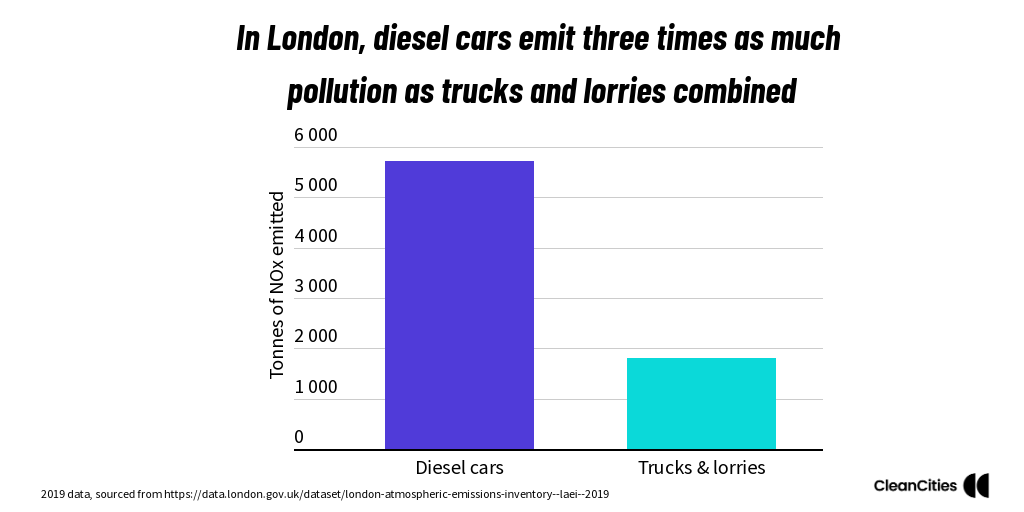 New analysis by the Clean Cities Campaign shows that pollution from diesel cars alone is estimated to be three times worse than that from heavy goods vehicles (HGVs) across London. The latest official data shows that diesel cars contribute 5,717 tonnes of nitrogen oxide (NOx) emissions compared to just 1,808 tonnes from HGVs [1]. This has shifted over six years: 2013 data showed that HGVs emitted a similar level of NOx emissions as diesel cars (5,818 tonnes vs 5,727 tonnes).

The same data reveals the share of harmful NOx emissions from diesel and petrol cars has also risen in every London borough (excluding City of London) – up by 26% between 2013 and 2019 [2].

NOx emissions react in the air to form nitrogen dioxide (NO2) – a toxic gas that London has been struggling to eradicate. NO2 has been shown to stunt the growth of children’s lungs, leaving them damaged for life [3], and contributes towards the death of 4,000 Londoners every year [4].

A coalition of 19 campaign groups brought together by the Clean Cities Campaign have signed a joint declaration urging council candidates to commit to cleaning up London’s toxic air ahead of elections in May, including phasing out polluting cars. The ‘#CleanAirWins’ campaign will put the positive and upbeat case for action on clean air, demonstrating the popularity of such policies. Polling has shown four fifths of Londoners are concerned about air quality [5].

The coalition, which includes Friends of the Earth, Asthma + Lung UK, Sustrans, Choked Up and Mums for Lungs have outlined a 4 point plan that they want to see incorporated into local manifestos. The plan has been sent to all 1,800 councilors in London and the major parties contesting the elections urging them to support clean air.

Oliver Lord, UK Head of the Clean Cities Campaign, said: “Clean air is a rare gem: a vote winner and the right thing to do. The vast majority of Londoners – 80 per cent – are worried about the health impact of air pollution. There is a duty on candidates in the upcoming election to show how they will help their constituents to ditch polluting cars in favour of clean transport. Local councillors can’t shirk responsibility for this issue – they are responsible for 95 per cent of London’s polluted road network.”

This will be backed up by practical advice to deliver cleaner air including additional cycle hangars which have huge waiting lists across the capital, creating new school streets and council action to phase out diesel cars.

There is still a huge way to go to shift away from polluting transport, which has declined far more slowly than emissions from homes or workplaces [6]. A report commissioned by the Mayor of London has shown that we need a 27 per cent reduction in the distance driven by cars across the capital to meet London’s target of reaching net zero by 2030 [7].

Jemima Hartshorn, from Mums for Lungs, said: “In London, children are growing up with stunted lungs from breathing badly polluted air and we know that diesel cars are one of the biggest culprits for this. Around 4,000 Londoners die prematurely every year and thousands more face debilitating health conditions, with low income households and people of colour disproportionately affected. We call on all local election candidates to stand against dirty diesel and for healthy forms of transport.”

Further campaigns and activation events are planned in the run up to May.

Notes to the editor and references:

The latest official data (2019) shows that diesel cars contribute 5,717 tonnes of nitrogen oxide (NOx) emissions compared to just 1,808 tonnes from HGVs. This has shifted over six years: the same analysis of 2013 data showed that HGVs emitted a similar level of NOx emissions as diesel cars (5,818 tonnes vs 5,727 tonnes).