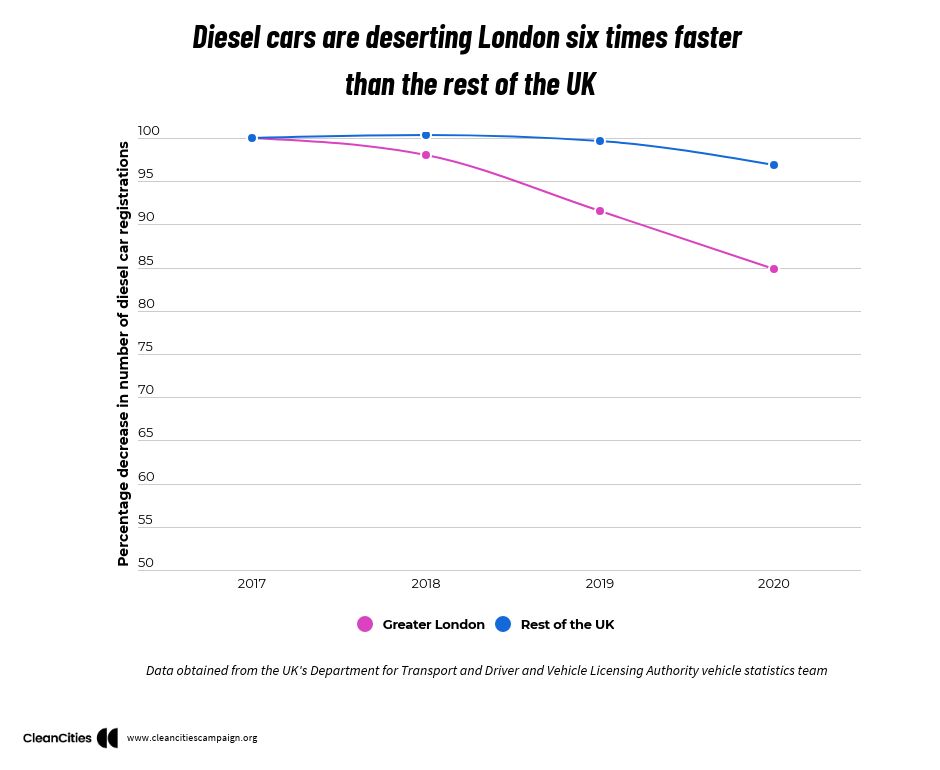 22 October 2021 -Londoners have ditched diesel cars 6 times faster than the rest of the UK, since the ULEZ expansion was announced. However, more than half of London drivers may have switched to petrol cars. Campaigners call on the Mayor of London to keep his promise to deliver zero emission mobility by 2030.

New data published today by the Clean Cities Campaign [1] shows the number of dirty diesel cars owned in London has reduced by 15.2% since the Mayor of London first announced plans in 2017 to expand the city centre’s Ultra Low Emission Zone (ULEZ) [2], more than six times the trend seen elsewhere in the UK over the same period [3].

This dramatic shift shows how the ULEZ has ended Londoners’ desire for diesel. Around 127,500 diesel cars left London between 2017 and 2020.

Jemima Hartshorn, Clean Cities partner and Founder of Mums for Lungs, said, “The expansion of the Ultra Low Emission Zone will shield millions more Londoners from toxic air as drivers desert polluting diesel cars at breakneck speed. This is a significant moment in our fight for kids to breathe clean air. The Mayor must continue pushing to get toxic diesel off our streets and protect our children’s health.”

Fewer diesel cars on the road has reduced London’s air pollution. Nitrogen dioxide pollution, half of which comes from diesel engines, has decreased by 44% by the roadside in central London since the ULEZ launched [4].

Yet whilst a shift from dirty diesel is hugely welcomed, just over half of the diesel cars (around 72,500) have been replaced by petrol equivalents rather than shifting to cleaner zero emission mobility – active travel, public transport and shared electric vehicles.

Oliver Lord, Head of Clean Cities Campaign UK, said, “The expansion of the Ultra Low Emission Zone is monumental and has turbo-charged the end of diesel cars in London. We can’t stop now – if the Mayor is serious in his commitment for London to be carbon neutral by 2030, there is only one way to go: petrol and diesel cars out. Active, shared and electric mobility in.”

The Mayor was elected on a manifesto aiming for London to be carbon neutral by 2030 [5]. On 25 October 2021, the ULEZ will expand up to the North and South Circular Roads. Cars that do not meet Euro 4 petrol and Euro 6 diesel emissions standards will be affected [6].

[1] Clean Cities is a European coalition of NGOs and grassroots groups campaigning for zero-emission urban mobility by 2030: https://cleancitiescampaign.org/about/

[2] Plans to expand the ULEZ were announced for the first time in February 2017. A public consultation began in November 2017 and then expansion was confirmed in 2018:

[3] Analysis by the Clean Cities Campaign using data obtained from the Department for Transport and Driver and Vehicle Licensing Authority.

Data shows that the total number of diesel cars owned elsewhere in the UK reduced by 2.3% between 2017 and 2020.

[5] The Mayor was elected on a manifesto aiming for London to be carbon neutral by 2030: https://sadiq.london/wp-content/uploads/2021/04/Sadiq-for-London-Manifesto-.pdf (page 54).